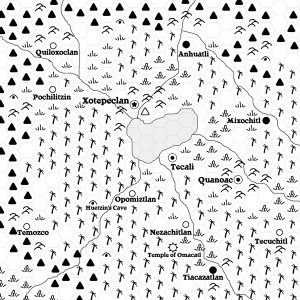 I love RPG maps as a concept, but I have a tendency to shy away from them for settings I produce. I like the vagueness that comes with the lack of a map. But at the same time, damn if the old “Known World” maps and such just set my mind to racing.

So, with a little help from map tools by the inimitable Dan Proctor and the incomparable harmyn, I decided to knock together this thing over here on the right side of the screen. Yep, it’s an honest-to-goodness attempt to map out Tlactoztlan based on the bits and pieces that have been revealed in the various writeups I’ve done on that setting.

This is probably not final, and it certainly shouldn’t be taken as any kind of canon. Or rather, I utterly and completely reserve the right to blow this up and replace it with something else entirely. Or at least refine it if I ever get on the stick and produce anything for distribution beyond the confines of the blog.

So let me know what you think of what you see. I’m no cartographer and I’m definitely open to suggestion. That said, I’m not overly concerned with realism here. So if you find yourself getting hung up on the intricacies of my terrain placement, please feel free to share. Just don’t get too distraught if I don’t immediately freak out with you 🙂

Wherein your humble scribe, desperate to fill up space while he feverishly works away at the next batch of entries in the Demons Of Adad Untash, posts some old Traveller homebrew stuff that might be interesting to someone. Maybe. OK, probably not. But still…

For what it’s worth, this subsector was put together during a brief and ill-advised flirtation with T4 a long time ago. I don’t think there was anything in there that would make these hard to use with Classic Traveller or any other edition. But I could be wrong. In any case, you’ve been warned.

The Claybourne subsector occupies grid location A of the KOBE Sector. The fringeward and trailing boundaries of the Shardyn Alliance meet in the Claybourne. The Claybourne was named for Kenneth Claybourne, legendary explorer, statesman, and founding father of the Alliance.

In honor of the late Dave Arneson, who left us one year ago today, I present my (non-winning) entry in last year’s One Page Dungeon Contest. I was gunning for the “old school” category and took my inspiration almost 100% from Supplement II: Blackmoor.

So in case you missed it (and you know you did) here’s your chance to visit .

Here’s the entirety of the background, as a teaser:

In ancient days the monastic assassins known as the Sons of Arn built a great temple to their strange god on an island off the southern coast.

For many years they managed a troubled coexistence with the other religions. But when they dared to strike down the high priest of the sea god, their island temple was cast beneath the waves forever in an act of divine retribution.

Their knowledge lost and their religion destroyed, the Sons of Arn vanished from the world, leaving only half-remembered whispers in their stead. But now rumors abound of a shipwreck whose lone survivor escaped from a Sahuagin band that makes its home in a submerged ruin eerily reminiscent of the legendary Sunken Temple of Arn.

As a One Page Dungeon, The Sunken Temple Of Arn lacks game stats, but should be useable with pretty much any system you want. I specifically had OD&D in mind when I wrote it (obviously), but Swords & Wizardry (Core or WhiteBox) or Labyrinth Lord should work fine. Of course, so would Barbarians of Lemuria, Basic RolePlaying, OSRIC, or any other system that tickles your fancy.

One quick note for those who might not be familiar with a couple of the monster names: per Blackmoor (and some later books):

Most people who happen across this post probably know that stuff already. But hey, it never hurts to pass along a bit of (slightly) lost wisdom, eh?