An unfinished letter found among the personal effects of Sakeurn Tarcer, late of the city of Isyr…

The island-continent, called Troqelac on the ancient sea charts I found amongst my grandfather’s papers, but known to those who dwell there as Nogoloth, rests deep within the Black Ocean, far to the east of Nysperé. Ships from Ulrath and Morryn used visit its shores, but rare is the captain who will risk that damned route any longer.

Whether it is a trick of the atmosphere or the curse of some hateful god none will say, but whatever the reason the truth is that it is perpetually twilight across the full breadth of Nogoloth. The sun never shines fully on that island – I know, for I have longed for its full radiant light to relieve the dread I felt every day of the seven years I lived in that accursed land. I fear that even now I may not have shaken the touch of madness that lingers over those who endure that interminable gloaming.

For surely you will think it madness when I speak at last of the terrible things which live and hunt in the umbral spaces between the cities that have grown up, fungus-like, in that dark place. Yes, we of Nysperé have our fair share of dangers in the wilderness – and even our own shadows to face among our fellow civilized inhabitants – but nothing here on our home soil can compare to the horrors I beheld in the murk and gloom of Nogoloth.

But before I drive you to disregard all I have to report with careless talk of Dagon & Hydra and things worse still, I should truthfully and in a steady voice tell you of the rational facts of Nogoloth. I should remain calm, and speak sensibly of the Great City of Khaarm, where the fountains run with crystal waters to nourish the souls of the great scholars and priests who inhabit the bone-white towers that ring the University. I should tell you of old Cwnuihd on the western shore and the raven-haired beauties who stand on the docks and sing songs no human ever wrote to the ebon-skinned crews of the emerald-sailed ships that brave the reef to take on cargoes of rubies the size of human hearts.

I should, no I must speak to you of the eastern port of Oustminnish and the strange, degenerate look that looms like a shadow over some of those who live in the precincts nearest the shore. Few of that city would speak to me of such things, but those who would whispered of the sea devils who sometimes leave their home beneath the waves to consort with the Istholams, the Phaths, the Chac-Langthuses, and several other families of lesser standing within the community.

I ought, though it behooves me not, to tell you of Pnikigystros where the ancient wizard Orazath resides. I am bound by blood oath and implacable geas to ensure that the knowledge I unearthed within the great library of Canton-on-Imisk does not recede into the darkness it seeks as surely as the waters of the river upon which the town sits seek the oblivion that comes with returning to the sea. Will you listen to me? I have search so long for someone who would bear the burden of this terrible wisdom I possess.

The letter was found, along with a hastily scrawled map to the “island-continent” (completely unknown to any within the scholar’s guild) referenced in the letter, on the man’s body which was discovered in an alleyway in one of the seedier portions of Isyr. The unfortunate victim of the sort of violence that happens amongst those who give in to the darker temptations within that city. 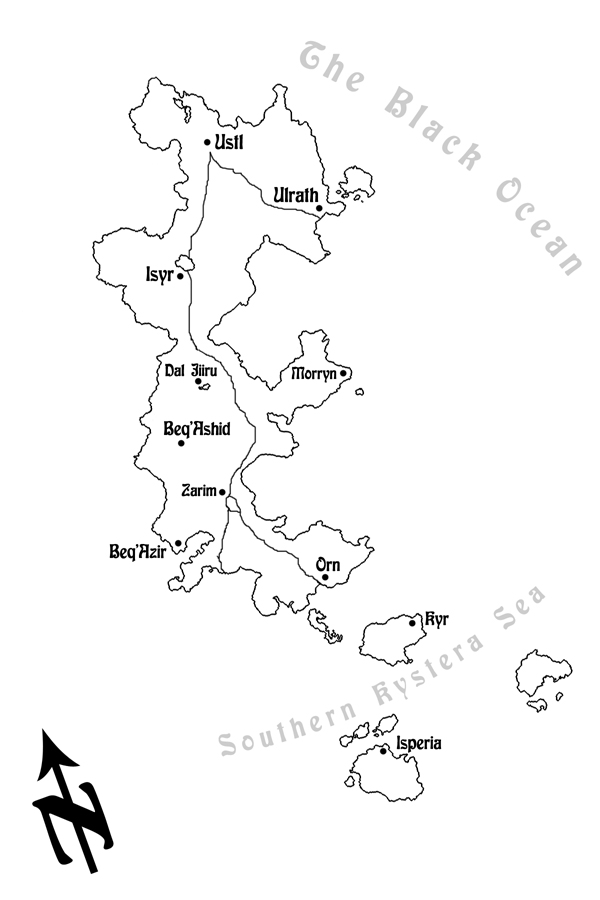