Sometimes you just want to play as a Pixie. Well, maybe you don’t. But someone out there does. And while Tunnels & Trolls has always has Pixies as a core PC race, Basic RolePlaying games haven’t. Until now. So here’s my take on the Pixie as a playable race in BRP.

Pixies are small (6 inches – 2 feet tall), winged forest sprites who are often innately magical and occasionally take part in grand adventures, either as friends or foes. Most Pixies are shy, benign creatures who avoid humans and the other larger races outright. Some, though, can be malign tricksters or bold adventurers. When pressed into combat they will swarm their opponents, poking and slashing at them with tiny weapons that seldom result in more than a scratch on their own, but which can add up quite quickly. Some Pixies are even especially adept at attacking the more exposed and sensitive areas of larger opponents.

Pixies’ diminutive size and natural flying abilities make them very difficult to strike in melee and almost impossible to hit with missile weapons. And though their magical abilities are seldom of the directly harmful sort, they can often be used to confuse, mislead, and misdirect their foes.

Powers: Pixies are almost always capable of at least a small amount of magic. Consequently, in most cases any individual Pixie should possess a minimum of 2-3 Sorcery or Magic spells, depending on which system is used in the game at hand. Spells that affect others’ perceptions are the most common kinds of magic known by Pixies. For Magic spells, skill levels will likely range between 45% and 65%.

Special: Pixies can fly via their natural wings. For game mechanics, refer to the Wings mutation on p. 110 of the BRP Big Gold Book. Pixies are treated as though they have the Major version of this mutation.

Some particularly martial Pixies may possess the Pixie-Fu (Martial Arts) skill, representing their ability to strike at less well-protected areas due to their size and maneuverability. Personally, I’d recommend allowing PC Pixies to have access to this skill during character creation (though I’d keep the maximum initial value for the skill on the low-end, say, 25% tops), to enhance their playability in combat-heavy settings.

Wherein your humble scribe, in honor of the upcoming new Magic World RPG, produces a couple of characters using the Elric! iteration of BRP.

Sayle, Fast-Talking Mercenary, Age 26
Law 3 Balance 0 Chaos 0
Goateed, generous, and garrulous, Sayle travels the Young Kingdoms as a sword for hire, with only a lock of his mother’s hair worn in a small leather pouch about his neck as a reminder of his youthful days in distant Argimiliar.

Vanaya, Resourceful Escaped Slave, Age 26
Law 0 Balance 0 Chaos 3
Her long, raven hair loose to hide the Jharkorian slave brand on back of neck, Vanaya wears her dead sister’s boots. She never speaks of her childhood, and has vowed one day to master all the magic she can to make her vengeance upon her family’s tormenters both dark and complete.

This just in… Chaosium will be releasing a new version of Magic World this summer! Here’s the skinny:

MAGIC WORLD is a self-contained fantasy roleplaying game using the classic “Basic Roleplaying” system. The game allows you to play characters in a world of fantasy, adventure, and excitement. The rules of MAGIC WORLD are simple to grasp, while having enough options and complexity to suit any gaming style. Characters grow in experience organically, without relying on artificial constructs such as classes, levels, etc. Any sort of fantasy character you can imagine, you can play. MAGIC WORLD contains:

* Full rules for creating characters in a world of magic and fantasy.
* A robust magic system with nearly one hundred spells. Any character may become a spell caster with the right combination of raw talent, and training!
* Detailed, yet streamlined skills and combat rules.
* Complete rules for nautical adventures.
* A bestiary of more than sixty creatures to use as foes for the characters, or as the characters themselves! Play as any species imaginable: Human, Elf, Orc, Centaur, Troll, Talking Beast, and more!
* Gamemaster advice, and resources.
* A gallery of enchanted items which might be found in your characters’ adventures.
* A complete sample campaign setting, “the Southlands”, to jump start your adventures.
* And more!

The best part of this is that little “self-contained” bit. That should mean that the Big Gold Book isn’t needed, and that this little gem can be a proper gateway drug to the majesty that is BRP. That’s a whole lot of new spells for, presumably, the “classic” Magic World system (which is the “Magic” system in the BGB), too. I can’t wait to get my hands on this thing.

UPDATE: In case you don’t wind up reading the comments, I figured I should point out that it’s been revealed that the magic in Magic World will be the Sorcery system from the Big Gold Book (which is the system that appeared in Elric!) with additional spells added in from other Elric!-y sources. The whole game is, in fact, a reworking of the Elric! rules presented as a complete game. This is marvelous news and I’m just giddy at the prospect of having something like this from Chaosium. I think it’s exactly what BRP needs. 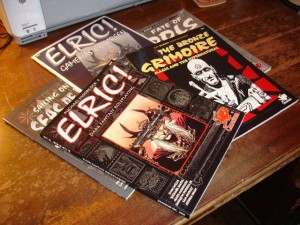 So King’s Hobby in Austin, which I hadn’t been to in a few years, seems to have a whole lot of its RPG stock on sale. I fear that this is because after the changeover in ownership they’re not looking to carry this particular flavor of geekdom once they clear things out. So if you live in or near Austin you might want to swing by and see what you can find.

Speaking of what you can find, I hit a vein! They had new old stock of some very lovely Elric! books, as you can see to the right. Everything is lightly shelfworn, but otherwise in great shape. And it was all 50% or more off of cover price. Yes, I’m bragging. No, they don’t have any more Elric! books (unless they’re hiding stuff in the back and only bringing it out when necessary – but I doubt that). They do have some other interesting stuff, though. Oh, and I snagged a copy of the 3rd edition of Skyrealms of Jorune (also 50% off) on a whim, since I’ve never actually owned a copy of it before.

So thank you, King’s Hobby, for these delightful treats. And if you’re giving up on RPGs, it’s our loss. But hey, at least you’ve got the town covered for WWI airplane models and such. We need that niche handled!