There’s a little movie out right now that you might have heard of called Guardians of the Galaxy. It’s a romp, and at times it feels very much like an RPG session. All of the protagonists are at least somewhat absurd, and their behavior marks them as Chaotic Good or Chaotic Neutral (with Good tendencies, maybe) in D&D-speak. So they come across pretty nicely as PCs.

I got to thinking about what game I’d use to run a similar story, and while my initial thought was something like Supers!, I think that may have been based on lingering ideas that Guardians as a superhero film rather than a big ol’ pulp scifi adventure. I still can’t quite decide between X-plorers and Tales of the Space Princess, though. So I thought I’d work out how I’d do a couple of the more popular characters and use that to inform my thoughts.

So, without further ado, here’s how I’d approach the core race/class considerations for a certain raccoon and his tree-guy buddy…

X-plorers, by default, focuses strictly on humans. But there’s an excellent supplement for designing alien and robot classes, and that’s what I’ve used here.

For Tales of the Space Princess: Races w/ Suggested Classes

Tales of the Space Princess has great rules for building unique aliens right there in its core book. I approached these two along those lines. Since race & class are separate in TotSP, I’ve listed a suggested class for each.

Even though I’m more partial to Tales of the Space Princess on the whole, I think I have to concede that X-plorers gets this particular job done better. The custom-built race-as-class classes fit just a bit better, even though I’m not 100% sold on the skills that Big Tree Guy winds up with. That’s a reasonable trade for him having a strong Regeneration ability without having to hack on the rules any further. 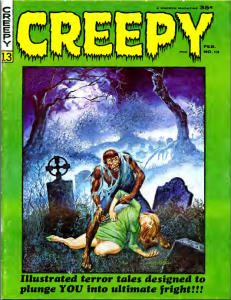 A whole lot of Warren Publishing “not comics” (and therefore not subject to the old CCA Code) are available online at Archive.org. This includes a large run of Creepy, a bunch of Vampirella , a mess o’ Famous Monsters of Filmland, a handful of 1984, and a smattering of other nifty things like their Lord of the Rings special.

A lot of this stuff can serve as inspiration for whatever gaming you’re into these days, and the ads in these are gold. Dig in… if you dare. 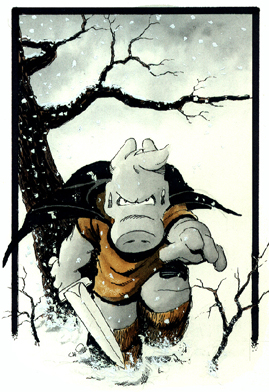