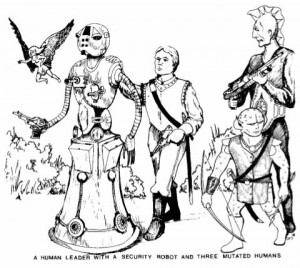 Ronin versus Kappa, from Bushido

I love old RPG black & white line art. A lot. And this one is so evocative of the Fantasy Nippon that is the central setting for the FGU classic Bushido. I’ve never actually played it, sadly. But damn if the art doesn’t make me want to.

Of course, Bushido’s system is, like much from FGU, a bit thick, so I don’t think I’d be likely to use it to scratch my samurai itch. In fact, I’ve been tinkering (well, I was tinkering, I’ve mostly stopped now) with a Barbarians of Lemuria-powered semi-Bushido. BoL seems like a good system for some chanbara action (really, of course, it’s a great system for any action), after all.

So, sticking with the finding inspiration thing I’m rocking right now, here’s a quick writeup for the Kappa as a BoL critter.

Kappa are malign water spirits who resemble ugly little men covered in scales, often (though not always) with turtle-like shells covering their backs. They have a small, bowl-shaped depression on their heads that holds a small amount of water from their home lake, pond or river. If the Kappa can be tricked into spilling this water it will flee immediately to return to its lair. A waterless Kappa’s attributes are reduced to -1 and it will die within 3 days if it cannot return to its home to refill its head basin.

Kappas are masters of Koppo, a bone-breaking technique. If they score a Mighty Success when brawling they may elect to afflict their target with a broken bone. Damage done as a result of this injury may not be “shaken off” (BoL LE p. 39) nor may it be included in the 1/2 LB recovery after a combat (BoL LE p. 10). However, the damage done by a Koppo attack does not receive the normal +1d6 associate with a Mighty Success, though it is still set at the maximum damage for the attack (i.e., the attack does 5 points rather than 5 +1d6).

Kappa are minor magicians, but any spells they cast must relate in a significant way to water. As spirit beings they are also able to draw upon their connection to the water to use Fate Points to grant water-themed boons or flaws.

All Kappa love cucumbers and an offering of such will go a long way towards easing any encounter with them.

Protection
1d3 (scaly skin) or 1d6 (shell), depending on where the attack strikes the Kappa