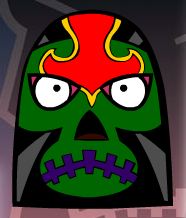 El Zombi Atómico, the scourge of Veracruz, is at it again. Now – with his Zombi Queen by his side and his Zombi henchmen dutifully following his every order – he holds the city in his cold, dead hands. The call goes out all across all of Mexico for brave luchadors to send Eza (he hates it when people call him that) and his gang back to hell and save Verecruz from a fate worse than death!

New Perk: Signature Move
What’s a luchador without his (or her) signature move? Nothing! That’s what. This perk, which costs two skill dice, gives your character the ability to declare that he is performing his signature move once per combat encounter. When doing so you get to double your Brawling roll for that particular attack roll. You must, of course, name your signature move and declare it with the appropriate lucha spirit when you decide to perform it in combat.