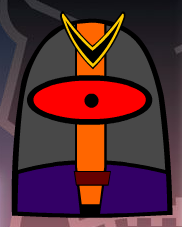 Los Monstruos Neptúnicos (the MonsterMen from Neptune) have landed in Mexico City and they will stop at nothing in their conquest of the Earth. These beings are tall (well over 9 feet) and quite strong. They are also clumsy and are terrible dancers, which is a shame. Because what each MonsterMan wants most in life – above conquest, mayhem, and destruction even – is to dance gracefully to the salsa rhythms they pick up from the radio broadcasts from XEPH. Their rampage through the city can only be stopped by brave luchadors and, perhaps, the clever application of some serious ritmo.

Because of some strange trick of their alien neurophysiology, the MonsterMen from Neptune must dance – often quite badly – when they hear salsa music. If there’s such music playing within earshot, the creatures will not attack and are unable to defend themselves actively. Perhaps even more amazing is that when dancing, these creatures’ normally rock-hard skin becomes supple, reducing their ability to withstand damage.

Neptunian IceRay Gun
These weapons do no damage initially. When they first hit they incase the target in a sheath of ice that has a strength of 3D. Each subsequent round the ice grows in strength as it freezes more water out of the atmosphere. Roll an additional die each round and add it to the total strength of the ice.

A person trapped in the ice is completely immobilized unless he can make a successful Might check against the strength of the ice (this counts as an action for the round in which he attempts to break free). Once the ice reaches a strength greater than the victim could roll on a Might check (not counting the possible exploding of the wild die) begin applying the ice’s strength as damage against the victim’s Soak.