Wherein your humble scribe presents a group of noble warriors for Deluxe Tunnels & Trolls. Why? Because his long-awaited hardback from the agonizingly (if moderately understandably) oft-delayed Kickstarter arrived at long last yesterday. Pictures of the book provided for your enjoyment. 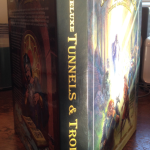 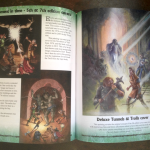 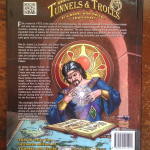 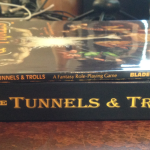 Erginius of Autoria’s lost classic, The Panoriad, tells the tale of Alkibiades of Pythos and the journey he undertook to recover the Lyre of Tiros for the glory of Pythos and to win the love of Queen Meliana. The charming and charmed Alkibiades – a brilliant historian and philosopher with a talent for preparing spanakopita so delicious that Hera herself declared it the finest outside of Mount Olympus – recruited a disparate band to join him on his quest. Lasthenes, captain of the Panora. Echephron the beast tamer. Isagoras the tale-teller. Thestor, famed bronzesmith of Xaneira. Philonikos the Giant. And, of course, all of the unnamed Panoranauts who perished as the quest continued.

Among the dangers faced by Alkibiades and his compatriots included the Nacippe – a legendary sea serpent, the Oedes – twin tigers of Tartarus, the Haleclyphes – an army of damned souls risen from the River Styx, and Belemeos, son of Hades.

The tragedy of The Panoriad, of course, is that its ending has been lost to time. Many scholars have their own theories, and many fragments and forgeries have been discovered over the centuries, but none have been accepted by the academic community as definitive.

Belemeos is a demigod, son of Hades and the mortal woman Polytio. He serves as a guardian of treasures that have been consigned to his father’s realm. He wears armor constructed of the bones of dead heroes and stands well over 9′ high.

Seeming at first like a dense, swirling fog, the individual spirits that comprise the Haleclyphes rise from the Styx to repel any who would cross without the express approval of Charon.

As black as the grave, the twin tigers of Tartarus stalk the shores of the Styx hungry for any living flesh they can devour.

Nacippe is a red-hued sea serpent that preys upon smaller vessels across the breadth of the Sea, breathing fire to destroy the ships and deliciously roast their crews.

4 thoughts on “dT&T: The Voyage of the Panora”