Wherein your humble scribe presents an NPC for Narakam, his Barbarians of the Aftermath setting.

Riding south from the shining city of Bu – the last bastion of science and technology in the outer realms – comes Jong-Kyu, the Jade Horseman. A powerful warrior with the heart of a poet and the calculating mind of a scientist, Jong-Kyu seeks to uncover the true, scientific history of Narakam. The Jade Horseman fears no creature of the wastes nor any science or magic possessed by the Varna or the Deva. This bold adventurer’s thirst for knowledge will bring him to the Gates of Wisdom and the Doors of Understanding, and though those temples be guarded by powers unguessed, Jong-Kyu will conquer them or die trying.

Vandraj Takesh is a young Varna noble who makes his home in the city of Bai. Like his father before him, Vandraj serves as a physician to the wealthiest families in the city, but this is only a means to an end. Vandraj seeks to understand as much as he can about the world outside of the safety of civilization – both about the people who live in the Wilds as well as about the history of the time before.

Young, brave, and foolhardy, Vandraj has ventured into the Wilds on more than one occasion in an effort to find material to study. On one of these trips he glimpsed the beautiful Pariah warrior Na’ilah Baras as she single-handedly fought off more than a dozen Varna soldiers sent by his uncle, Karjesh Jit, to bring back subjects for vivisection. Ever since that day – when no one noticed the stray light pistol shot that felled the soldier who almost got his net about the savage woman – Vandraj has been scheming on how to make the untamed and enthralling creature his own. 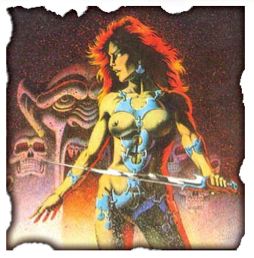 Born to a non-mutant Pariah family in the Wilds of Narakam, Lodan Triplex Marveen Dodd nevertheless displayed a number of… genetic drifts, which lead his father to accuse his mother of being unfaithful. Though the family unit held together in the end, Lodan Tiplex Marveen Dodd never felt like he belonged and left his village as soon as he was old enough to survive on his own. He has traveled far and wide, learning as much as his quick mind would absorb. Because of its detriment to himself, he keeps his mutant healing ability under wraps in almost all circumstances.

Using Barbarians of the Aftermath I rolled up an alien invasion that I worked into the following:

In 2014 a limited nuclear exchange between India and Pakistan results in the destruction of a sacred Hindu temple that was actually a beacon sending out an “All’s Well” signal to the stars.

While the rest of the nuclear-armed countries decided “Hey, the missiles have started flying, we don’t want to pass up a chance to lob a few ourselves” a group of aliens, who bore a distinct similarity to certain Hindu deities*, dropped in to see why their signal had been cut. All hell then proceeded to break loose as the non-Hindu portions of the world interpreted their arrival as an invasion and went to absurd lengths to drive them off.

The aliens, allied with India and other Hindu cultures, fought back. Between their advanced technologies and the destructive power of a “cornered” Earth, pretty much everything was messed up beyond belief.

Now, 800 or so years later, you have a small pulp science portion of the world that is loyal to the aliens (known as the Deva) and the rest of the world in proper Thundarr-style ruin. The Deva have used their super science to uplift a number of monkeys, elephants and birds (BotA Awakened Animals – called the Hanumani, Ganeshani, and Garudani) to help support their “chosen people” – called the Varna (BotA “standard” Humans).

At the same time (whether due to normal radiation or some effect of the Devas is unclear) a small group of humans have evolved into the Buddhas (BotA Adonai), who do their best to live apart from both the control of the Devas and the strife found in The Wilds. Speaking of the Wilds, that region (which is actually much of the Earth) is populated by the Pariah (BotA Wastelander Humans as well as Mutants, no distinction is made in the eyes of the Varna).

Also, at some point, an offshoot of the relatively benevolent Devas showed up (the Varna call them Rakshasas). They, too, have done a little animal awakening themselves (particularly snakes, called the Nagas) and are generally the antagonists of the setting.

The setting, as a whole, is named Narakam, which is the Sanskrit word for “Hell.”

I hope to do something with this, someday. But even if I don’t, it was big fun to create. I love the BYO Apocalypse tables in BotA.

* Just to be clear, no offense or disrespect is meant towards Hinduism by this. I’m just drawing on the old “Ancient Astronauts” concept and running with it in the name of post-apocalyptic adventure.