I grew up playing Metagaming’s The Fantasy Trip far, far more than I played just about any other RPG (yes, even more than D&D). I’ve always thought that this is part of what lead to me being the particular flavor of freak that I am. I blame it on the spirit of Cidri, the default setting for TFT that warped me into my current shape. Rather than try to explain that, I’ll just quote from In The Labyrinth, the “player’s handbook” for TFT (which is also the source of the illustration):

IN THE LABYRINTH, and most of the FANTASY TRIP material to follow, will be set in Cidri. This enormous polyglot world was chosen as a background for two very good and totally opposite reasons. The first is variety. Cidri is big enough to hold thousands of Earths; it has room for the world of every Game Master who’ll ever put pencil to hex-paper. There’s room here for every sort of fantasy adventure to co- exist — in a logical manner. And it provides a workable rationale for the weird melange of legend, historical fact, pre- history, science fiction, and sheer wild imagination that characterizes the work of the best fantasy gamers.

The second reason is the opposite one… consistency. THE FANTASY TRIP is an attempt to set up a rule system that is complete without being overwhelmingly technical — so the gamers can spend their time playing, rather than re-writing the rules. Hopefully, this will mean that everyone who plays this game can consider themselves part of the same gigantic cam- paign, playing out the destinies of a whole world. Whatever strange lands you map, there’s room for them in Cidri, just across that pirate-infested sea or trackless desert. No matter
how powerful the dictator’s legions may be on one continent, or how mad and mighty the sorceror-kings may be on another, there’s always room for peaceful lands or beast-haunted forests — somewhere. And, if you like, it can all happen at once.

Not that other worlds aren’t possible. The FANTASY TRIP system will work for historical adventures on Earth itself, or for excursions into the past or future of your favorite author. But parts of all these are to be found on Cidri as well — that was why it was created. Enjoy. 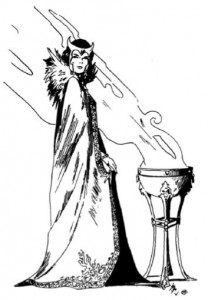 Sorceress, from TFT's In The Labyrinth

I took that passage very deeply to heart. And because of it, I’ve never felt the need to adhere to any official setting. And other than the fact that my worlds (and those of my friends) might have been part of Cidri (they probably weren’t, though) and the incredibly loose (or perhaps non-existent) links that some of the subsectors I wandered through in Classic Traveller might have had to the Third Imperium, I never really spent much time in an official setting.

Anyway, that’s neither here nor there. What matters is that I take the inspiration where I find it and throw back some nice new RPG content your way. So looking at the lovely Swords & Sorcery enchantress to the right – straight from In The Labyrinth – I present to you a new Barbarians of Lemuria character…

Once the slave and consort of The Wolfmage, Astrid Hriedall took every opportunity to learn the magical arts from the canny old wizard, and eventually she won her freedom by besting her master in a game of chess. Now she travels Kaalmuria seeking out sources of arcane wisdom wherever they can be found.

Boons
Magic of the Sorcerer Kings