Wherein your humble scribe presents an homage to a certain introspective & philosophical scifi program from the 1970s in the form of characters written up using the 7th Edition Tunnels & Trolls rules. Because he’s a very weird man. 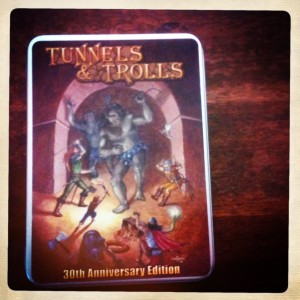 I’ve only played a handful of Tunnels & Trolls games in my life. And I’ve never played (or even read) Mercenaries, Spies & Private Eyes – which I believe to be essentially an iteration of the base T&T rules for modern non-fantasy gaming, though I could be wrong about that.

In any case, the core T&T rules seem ideally suited to adaptation for other genres, especially ones that (a) don’t benefit from an obsessively detailed combat system and (b) might appear on the surface to be exceptionally weird for RPGs (or, perhaps, ones lacking the appropriate degree of dour seriousness we’re all supposed to aim for as the avant garde, improvisational theatricians we’re supposed to be).

So from time to time the simplicity of T&T calls to me from the 30th Anniversary Edition’s little tin box I bought a few years back when a gas leak combined with an ice storm forced me and my wife to live in a hotel for a few days. And when that happens, I do weird things. Like write up several key cast members from a TV show I love as a test run for what it would be like to use T&T for a scifi game…

On September 13th, 1999, nuclear waste from Earth stored on the Moon’s far side exploded catastrophically, knocking the Moon out of orbit, sending it and the inhabitants of Moonbase Landau hurtling uncontrollably into space. Led by the noble Commander Ivan King and featuring a talented multicultural crew, these unintentional explorers of the universe will often come face-to-face with strange aliens, questions of cosmic importance, and even death itself.

I changed the T&T character class names a bit (Citizen is now Explorer, Warrior is now Soldier) and turned the WIZ stat into PSI.

None of the characters above have any PSI powers, which is good, since I don’t have any idea (or inclination, at the moment) to figure out how to handle such things. The short answer is that I’d probably just use a selection of the T&T spells (renamed, probably) to represent PSI abilities and either tweak the Wizard class a bit to be a Psionicist class or else do away with it entirely and come up with some way of letting the psionics develop in other character classes.

If this were going any further I’d probably tweak the Explorer class to be more than just the Citizen class with a different name, but for now making the distinction between combatants and not-really-combatants seemed fair.

Oh, and I also upped the starting number of Talents to two in anticipation of the crew running into tough aliens who have significant stat modifiers. Those plucky humans are always showing up the creatures who should rightly kick their tails. Hmm, maybe Humans ought to have a mod to their LK stat? Maybe. But that’s a discussion for a different time.