Wherein, in honor of the upcoming release of Cryptworld, your humble narrator presents a trio of unlikely heroes (or likely victims) and the Thing that they will face. These gaming constructs were built using an old copy of Chill (and Chill Things) I happened to have handy, but they should work just fine with Cryptworld when the wolfsbane blooms and the autumn moon is bright…

The wind was howling on the bayou, and the window panes of Armand’s little shack rattled like dice in a cup. The lights flickered occasionally, and the foetor of the marsh hung just about the edges of the place.

“You know, dey say it nights like dis L’Marais come looking for blood…” Emil said after exhaling a long plume of smoke from his fancy little cigarette. “He come up out de swamp an’ rip a man limb from limb. Then he make they arm ‘n leg do the rest ah him dirty work for a year an’ a day.”

“Shut up, Emil. You’re just trying to spook my brother. And drop the lame-o coonass accent, too. It’s insulting,” replied Edie, fiddling with her new camera.

“Ok, ok. I’m just trying to have a little fun. There’s nothing to do out here!”

“We’re only here ’cause you went and killed that pawnbroker. We have to lay low, remember?”

“Yeah, yeah. He was reaching for his gun, so I had to shoot him, ok? And this bayou is the perfect place to dump a body.”

Armand shifted slightly in his armchair. He wished his sister had never married the little man. She used to be prettier, he thought. Before LaCroix had gotten his filthy hands on her.

Armand stood up quickly at the sound of a heavy, thudding knock on the door. He knew what was on the other side. It was just like he dreamt it. And that meant the little man wouldn’t trouble his sister anymore.

“Who the hell can that be at this time of night?” Emil hissed. “If you called the cops on me, Armand, I swear to God…”

“It’s not the cops, Emil. Armand wouldn’t sell us out like that, would you, mon frère?”

“Of course not, ma soeur,” Armand answered as he walked towards the door. “But I do think it’s for you, Emil.”

L’Marais (more properly, L’Homme des Marais, The Swamp Man) is a foul thing indeed. It resides in the bayous and swamps of rural Louisiana, where it waits to feed on the blood and bone of its victims. L’Marais is composed of both plant matter and human body parts – the remains of murder victims dumped in the swamp. It normally has two unarmed attacks in a round (grab & crush limbs) but if it succeeds with both against one target it gets an extra armed attack – its dreaded rend.

Though L’Marais is unquestionably evil and will gleefully pursue any human being, it is not without a sense of honor. It always strikes out against criminals and murderers first. Some say that a killer who speaks of L’Marais on the night of the new moon will draw its ire all too quickly. 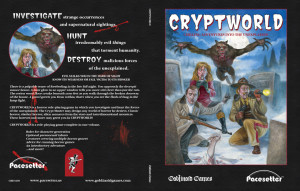