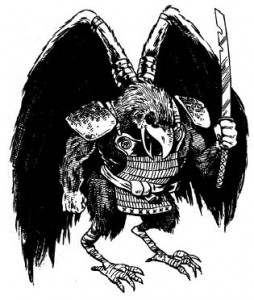 War is coming to Okibu Province! The forces of the Nakayama Clan are gathering near the borders and Daimyo Nakayama Yosuke has his eyes on the throne of Watanabe Castle. Lady Watanabe Euiko has requested that you take the daisho of retired samurai Murakami Shoichi, once the master strategist of Lord Watanabe’s army, to his hermitage deep within the high forest and convince him to return and lead the Watanabe forces as they seek to defend their Daimyo’s lands (and daughter) against the depredations of the Nakayama barbarians.

Room One: Entrance and Guardian(s)
Yamahari Forest, and the mountains that surround it, are the territory of a pair of mischievous Tengu named Hito and Jito. These two crow-like humanoids are ferocious combatants if angered, but are far more inclined to play tricks on travelers – at least those who show the proper respect to the forest and its masters.

A favorite of these tricks is to have Hito shape change into the form of a Buddhist monk and pretend to be dead, lying in the path of a group passing through Yamahari Forest. Jito will then circle the area, using his illusion powers to create a tableau of Bakemono stomping though the trees. Once the travelers have been tricked into paying attention to the outside threat, Hito will rise up, scare the group, and fly away cackling.

Hito and Jito will only engage travelers in combat if the group is particularly hostile or threatening towards the Tengu themselves or anyone else within Yamahari Forest.

The narrow path through Yamahari Forest occasionally widens to accommodate a shrine to one of the 10,000 gods of Akashima. At a shrine dedicated to Kanzeon the group encounters the old (but still spry and stunningly beautiful, of course) Jen-Mai, a tea trader. Jen-Mai frequently passes through Yamahari Forest and knows much of its inhabitants. She can, if flattered and treated well, give the seekers great insight into both the Tengu who protect the forest as well as any other subject relating to the area.

Jen-Mai is also more than a little familiar with the subject of Murakami Shoichi, having been quite infatuated with him when they were both much younger. She is aware that he makes his home nearby, but she has never approached him because of the difficulty in reaching his high cave, which is located on the southern face of the 2nd tallest hill within Yamahari Forest. Jen-Mai also knows that Shoichi’s favorite tea is Gyokuro, an expensive and rare delight that she just happens to have in stock. Perhaps the old man will be more favorably inclined to listen to the group if they present him with a gift?

Jen-Mai poses no danger to anyone, and will only fall to the ground weeping if threatened. If anyone should press their attack further, Hito and Jito will come to her defense. They will not be pleased with the situation and will deal harshly with anyone so crass as to take advantage of an honorable and respectful little old lady like Jen-Mai.

The southern slope of the hill atop which Murakami Shoichi resides is a steep climb, rocky and difficult to ascend. A Climbing check against TN 18 is necessary to make any significant headway, and should be repeated a total of three times to see if the rise can be crested. Further, Shoichi has carefully concealed a couple of traps along the way, all the more to discourage unwanted visitors. These traps take the form of loosened rocks that are otherwise ideal handholds for climbing. A Traps roll vs TN 18 (better than a 21 on the Climbing roll immediately preceding the trap) will successfully avoid “triggering” the traps. There is one trap immediately after the first Climbing roll and another immediately after the last Climbing roll. In both instances, a person triggering the trap will tumble the full distance back down to the bottom of the hill, losing all progress gained. A person falling from the 1st trap site will suffer 2D damage. A person falling from the 2nd trap site will suffer 5D damage.

Room Four: Climax, Big Battle, or Conflict
A group of a dozen or so soldiers of Clan Nakayama are gathered around the outside of Murakami Shoichi’s cave. They were sent by Lord Nakayama himself to abduct the old samurai to force him into service against his old master. They must have approached from the north and worked their way around. They now find themselves on the receiving end of the great warrior’s wrath. At present he is firing arrows at them from within his cave even as they prepare to rush in and overwhelm him with their superior numbers.

Helping chase away the Nakayama soldiers and presenting him with his old daisho will do much to open Murakami Shoichi’s eyes and soften his heart to the seekers’ entreaties on behalf of Lady Euiko. However, Shoichi remains reluctant to leave his hermitage and return to the ways of war. He can be convinced, but good roleplaying should be required here. Successfully convincing Murakami Shoichi is a significant challenge, but the GM should not stonewall the players. Appeals to his honor, or to his duty to the Watanabe family, or indictments of the Nakayama “barbarians” will eventually get to the old man. They will do so much sooner if he is able to enjoy a nice pot of Gyokuro tea while listening to them.

The retired samurai’s stats are presented below in case the seekers offend him or attempt to abduct him. If a fight breaks out between the seekers and Shoichi, Hito and Jito will arrive in 1D turns to aid their tenant.

Once Shoichi has been convinced to return to Watanabe Castle, it can be safely assumed that he devises a brilliant defensive strategy and the Nakayama invasion is repelled. Those who returned the old man to assist his Lord are feted and rewarded appropriately. Or, if the GM desires, the entire campaign against the Nakayama could be played out. But that’s as far as this five room “dungeon” goes.