So I’ve been running a game for some friends in Dungeon Crawl Classics. And you know what? It’s been quite a good time. Actually, it’s been one of the better games I’ve been able to run in a long while.

Before we go any further, I should point out that the book itself is so jammed full of incredibly enjoyable old school style art that it’s a joy just to flip through the thing. With full-page mood-establishing pieces alongside 1e AD&D Dungeon Masters Guide type humor spot cartoon bits, and plenty of smaller illustrations throughout, the book is basically a masterpiece of RPG art. In fact, it was seeing all of the illustrations in the PDF that caused me to snap and buy the physical book. The players (below) have all remarked favorably on the art as well and at least one of them picked up a copy of the book because of it as well.

The group consists of me as GM and three players, Lomax, Parker, and Saul.

Lomax is a dear, close friend I’ve gamed with off and on for 20-odd years. He’s not a serious RPG player when compared to dorks like me who read and write about RPGs with some (varying, of late) frequency. But he’s been around the block more than once.

Parker is a great guy and a good friend of the past 10-ish years who is a serious RPG player. He’s the one who was running the Call of Cthulhu game for the past year. We’ve played in quite a few things over the past five years and he really digs into the meat of gaming.

Saul is a relative newbie, both to RPGs and to my circle of friends/players. He’s a bright guy who really gets into the spirit of muderhoboism, which isn’t necessarily what DCC is about, but it fits.

I’ve been running the game almost exclusively from my tablet, referencing the rules and adventures electronically. All three players have also purchased the PDF and have it on their tablets at the table as well. Several of us have also been beta testing the very handy Crawler’s Companion by Purple Sorcerer Games. Most of the 0-level characters we’ve used were generated using the 0-Level Party Generator, also from Purple Sorcerer. Those not-cheap physical books are getting plenty of use, too.

About Those Funky Dice

One of the complaints I hear (and had myself back when DCC was in beta) was that it required the funky Zocchihedron dice (d3, d5, d7, d14, d16, d24, d30). In practice you don’t really need these, since those number ranges can be pretty easily reproduced using standard dice and clever rolling. But I sought out a set of the funky dice because I’m a dice nut. And they’ve been fun to have. They get shared around the table as need be and it’s not been a problem.

Oh, speaking of dice, I’ve done all of my combat rolling in the open and I’ve enjoyed it. Actually, most of the rolling (except for rolls to notice secret doors and stuff) has been in the open. This is pretty contrary to how I’ve played for the last 30-odd years, but it’s worked well within the context of DCC. I won’t likely import that behavior to other games, but here and now, that’s how I roll (pun intended).

The First Session – The Funnel Under The Stars 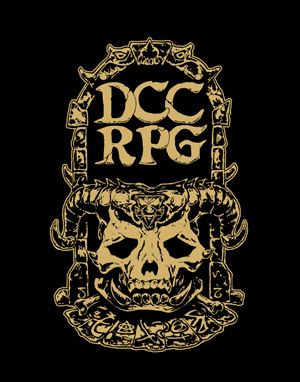 After a bunch of dithering on my part – because I wasn’t terribly interested in the funnel and wanted to get straight to the nifty class mechanics like Mighty Deeds of Arms and Corruption and such – and all three players expressing a desire to give the funnel a try (Parker in particular was hot for it, but Lomax sold me on the move with his observation that it shook things up and made the game more improvisational), we went with the dreaded 0-level funnel of death. And I’ll be the first to admit that it was very enjoyable.

I ran the group – with four 0-level characters apiece – through the 0-level adventure in the DCC book, The Portal Under The Stars. I won’t divulge anything about the adventure itself since there’s always a chance someone out there hasn’t played it yet and I don’t want to be the spoiler guy. But I will say that there were a reasonable number of deaths (mostly in amusing ways) and an unexpected amount of badassitude and heroism. They conquered the dungeon and escaped with four newly-minted 1st level characters among them (Lomax had two, Parker and Saul each had one): two warriors (Saul, Lomax), a dwarf (Lomax), and a wizard (Parker). We bashed through this relatively short adventure in about five or six hours, from rolling up characters to handing out experience and leveling up.

Observations On The First Session

The players, after surviving this adventure, have a goal. And that goal means they must leave their crappy little village and set out into the wilds in search of the witch who resides in the hamlet of Hirot (yes, that’s foreshadowing). Sessions 2 and 3 (and 4, though it hasn’t been played yet) see them beset by terrible swamp dragons and chased into an ancient, cyclopean ziggurat. They are joined on this journey by a few more recruits from their village, and rescue still more potential PCs captured by the denizens of the ziggurat within its walls.

I won’t say much more since this adventure (which is homebrewed, fyi) hasn’t wrapped up yet. But I will say that the game has continued to be fun even as the death toll has increased and the challenges have gotten more perilous. The leveled-up warriors and dwarf have succeeded in several Mighty Deeds of Arms and the wizard has cast a few spells to great effect. She (for it appears that Alfred is actually a woman) has also had to rely on Spellburn to cast a few spells that she would have otherwise lost access to due to failed casting rolls. So we’ve gotten to see a bit more of the DCC mechanics in action, and those game bits are truly gems.

Sadly, schedules have remained out-of-whack enough that the next session (wherein they should conquer the ziggurat, or die) is probably a couple of weeks out yet. But once they meet or defeat their fate, I’ll provide an update.

DCC is, as the title of this post suggests, fun. Big fun. Serious old-timey RPG fun. I’m still itching to see more of the game system in action, since we haven’t had an Clerics, Elves, Thieves, or Halflings make it to first level and start doing their special schticks. We’ve also only had a few meaningful fumbles, which as the GM makes me sad. But we’re getting there, and I’m very hopeful that we can continue this run long enough that the rest of the great tastes of DCC can be sampled.

In the meantime, I can say that you fine folks out there in RPG land could do a lot worse than DCC for your gaming experience. It’s definitely D&D in a lot of key ways (classes, levels, etc.), so if you don’t like that particular aspect of gaming then you’re not going to really appreciate DCC. But if you don’t mind such things (or even actively like them) then by all means give DCC a go. Just be prepared for deaths in the party and for the random nature of the game to be felt pretty strongly. I consider these things a plus, personally, but they’re definitely not for everyone (or even for me all the time).

We’ve been playing to a soundtrack of quality hard rock and classic heavy metal. It hasn’t exactly been immersive, but it has (for me, at least) helped with the mood and spirit of the game. If nothing else, hearing Black Sabbath and Iron Maiden in the background helps remind me that this is a game that, in some ways, harkens back to how I played when I was a kid. Anything goes, life is cheap, and the next encounter could well be your last. Rock on.