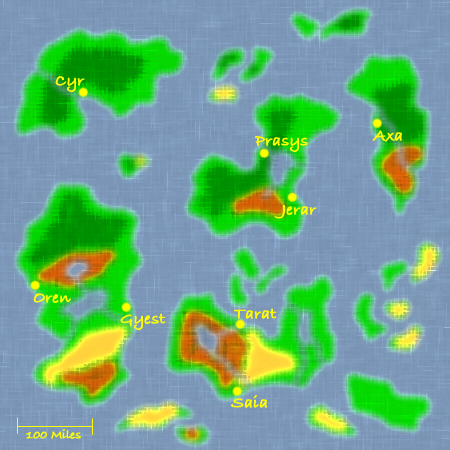 Wherein your humble scribe presents the remains of his entry into the old WotC setting competition thing. It’s been stripped of its modernisms, as well as a big chunk of game information.

I occasionally get misty-eyed thinking about this setting and beat back an urge to try to run something in it. That said, I think it would work nicely for a Sword & Sorcery tinged S&W or LL.

Core Ethos Sentence
Antiärre is a world of exploration, adventure and intrigue on the high seas.

Who are the heroes?
The heroes of Antiärre are the brave souls who set sail from the innumerable small islands that dot this otherwise largely oceanic world to explore the great oceans that surround humanity.

What do they do?
Merchants, cartographers, explorers and sages find new lands, new riches and new secrets in the uncharted waters of Antiärre.

Threats, Conflicts, Villains
From cultists in service of the Black Gods of Phara to merciless Hobgoblin pirates, from evil Sahuagin to the unknown horrors that may lurk even further beneath the waves, Antiärre has more than enough threats to keep even the most jaded sailor on the edge of his seat.

Phara, the single major land mass, located far to the south, is home to many evil forces. Those that live there long ago gave in to the corruption and darkness and now serve their Black Gods’ insatiable appetite for conquest and destruction.

Hobgoblin pirates rule all but the most stoutly defended waters. Their secrets closely guarded, the Hobgoblins are more than happy to prey on the foolish Humans who venture too far from the safety of the settled island chains in search of riches, wisdom and adventure.

The Sahuagin, sinister denizens of the deep, rule the undersea and do not take the surface dwellers crossings lightly. There are those who believe that the Sea Devils have made pacts with even more terrifying evils that dwell deeper still.

Nature of magic
Though magic is not unknown to the people of Antiärre, it is not necessarily an everyday companion. The gods of the Humans of Antiärre provide blessings and healing magics freely, but the greater magics must be learned from ancient texts lost to history.

Powerful magics are used by the servants Black Gods of Phara, but not without taking their toll.

Hobgoblin pirates may depend on a few small enchantments and talismans to help them, but even they are not foolish enough to believe that magic does not have it costs.

The Sahuagin may have gained access to magic beyond the ken of the surface dwellers, but how many souls have they sacrificed for that knowledge? And to what dark pacts have they committed themselves to retain it?

What’s new? What’s different?
Antiärre takes the focus of adventuring to discovery and travel. The great oceans of Antiärre provide endless adventure for those brave enough to leave the safety of home. The very nature of the world, countless small islands that have never before been visited, lends itself to the discovery of nearly any idea that can be dreamed of by players and DMs alike.

Antiärre is a world where magic is still magical. The setting is designed to inspire the players not to take the power and wonder of magic for granted.

The Campaign Guide In Brief

Antiärre: The World In question
Antiärre (ahn-ti-air’) is a large world that’s mostly island chains and the like. The overall culture is “southern European”/Greek/Renaissance (minus guns, plus magic) stuff. Large city states are the main type of political power/nations at this point. Various shipping guilds and such also have a great deal of influence.

There is at least one major continent/nation that has limited trading/interaction with Antiärre proper. It is known as Phara (fay-ra) and has an Egyptian/North African type culture.

Magic is known, but not nearly as über-dominant as it is in standard D&D. Specific house rules regarding magic are covered below. It’s worth mentioning that no one actually hates magic, it’s just not “that common.”

Antiärrein History
Antiärre is the name used for both the region of the world that contains the human-settled island chains as well as for the world itself. Human culture arose several thousand years ago in this area and has been developing and expanding for most of that time.

Regions
There are several “regions” to Antiärre, which are really just chains of islands that are fairly close to one another. Each region functions as a somewhat independent country or state, but none of these regions is truly unified in any way. City-states are the dominant political power. Toulons (too-lons) is the oldest and most powerful of the regions, and functions somewhat as the “capital” of Antiärre, but really only because it is well established and relatively central.

Cities of the Sabronne Region
Cyr (sear)
Known as the City of the Silver Bay, Cyr is renowned the world over for its shipyards. Cyric ships are widely regarded as the best on the seas. The timber harvested from the island’s great forest are the strongest available in Sabronne. Combined with the expert craftsmanship of the shipwrights of Cyr, the timber results in faster and more durable ships than are found anywhere else.

Oren (or-in)
Known as the Gateway to the Western Sea, Oren is the last major port before the long expanse of landless sea to the west. It is a bustling city, an explorer’s city. Cartographers and merchants alike see Oren as the beginning and end of all major journeys.

Gyest (ghee-yest)
The fertile farmlands that surround Gyest make it the agricultural capital of the Sabronne region. While the other cities can grow enough food to feed their own populations, most are somewhat at the mercy of the elements. Gyesti crops are always bountiful and their produce is generally regarded as the finest available.

Prasys (pray-sis)
The oldest city in the region, Prasys is home to many of the Shipping Guilds. Additionally, due to its long history, Prasys serves as the de facto capital of Sabronne. When disputes among the various cities arise, it is here that their emissaries meet to discuss and resolve those disputes.

Jerar (jir-ar)
Jerar is the military might of Sabronne. Jerari soldiers train across the island, where they are exposed to the most extreme conditions and thereby battle hardened into the ultimate warriors. It is said that one Jerari Dragoon is worth a dozen regular men.

Tarat (tar-at)
The City of Secrets, Tarat is the principal port of piracy, black marketeering and anything else that is best kept in the dark. Illicit goods from all over Antiärre can be found in Tarat, in the darkest corner of the seediest market. It is even rumored that the blackest magics and deepest mysteries can be found somewhere within the city walls.

Saia (sai-ya)
Saia is the city that has the closest ties to Phara, the mainland nation far to the south. A mercantile mecca, Saia has bustling markets and is the main port of call for importing and exporting to and from Phara. Rumor has it that Pharan spies have infiltrated the Governor’s Palace and are planning to overthrow the city’s government to make way for their own.

Axa (axe-a)
Hailed for its Navigator University. Axan navigators are said to be the best available to any captain in the world. The Great Observatory atop Mt. Sarroix is affiliated with the university and many of the maps and charts that are used by the most highly regarded captains come from here.

Languages
Antiärrein (Common) is the default “native language” for all starting characters.

Beginning characters may choose from the following for their “extra” languages:

Remember, all of this applies to “the other guys” as well. However, if you hope to learn something beyond the scope of this, you may have to fight an uphill battle against someone who knows more than you do…